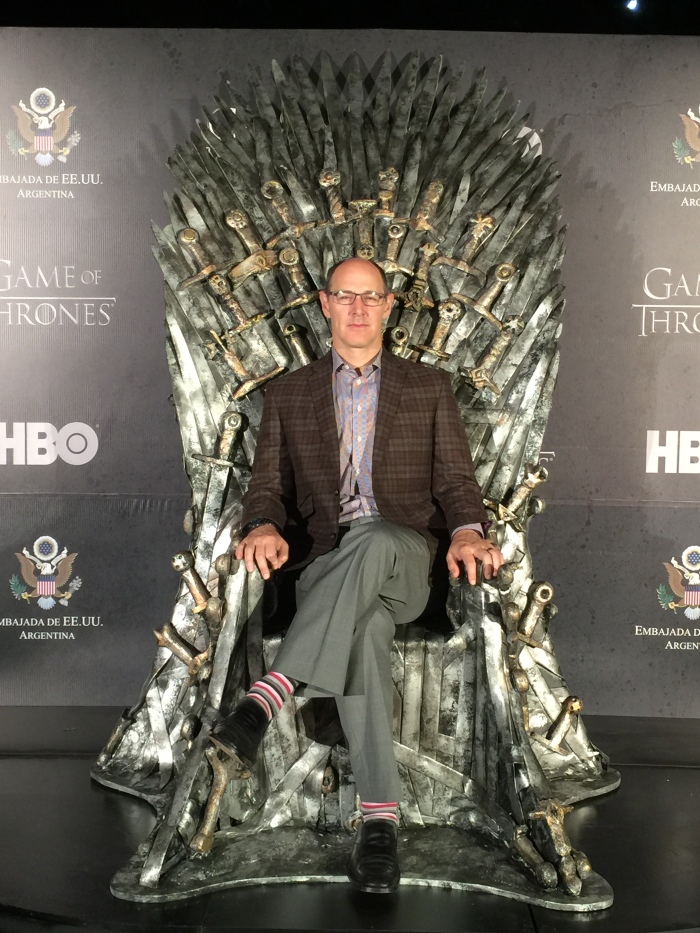 My favorite night of our journey thus far took place this past Friday night.  It wasn’t some spectacular sight or particularly fabulous cultural event.  It was just the four of us eating at La Stampa, our neighborhood trattoria.  The children were happy and well behaved.  Kate was chatting in Spanish (castellano) with our favorite waiter.  Michele was sipping her go to local Chardonnay.  Jake was eating an impossibly large mound of pasta.  It was placid and wonderful.  We are starting to settle in.

Saturday night, after a failed visit to an art gallery, we strolled Avenida Posada in Recoleta and stopped at a beautiful little shop that had traditional Argentine crafts.  The vendor told us he was optimistic about the economy but only because it couldn’t get any worse.  We then had dinner at Piegari.  Our very professional and old school waiter, Hector, took great care of us.  Ted, who prides himself on being able to pick out the “best” dish on the menu got his nose out of joint when he spotted something better than the dish he had ordered.  After some coaxing, Hector admitted it was better and then the older couple who were eating the dish confirmed it, telling us that they have eaten at this restaurant once a week for 20 years and this is the best dish.

On Sunday we attended an intercultural class where we learned about both common issues when moving to a new country and specifically more about the Argentine culture and customs.  Two major themes appeared.  First, our trials and tribulations are totally normal.  It seems obvious, but hearing that others had encountered similar ups and downs made us feel better.  Second, family and friendships are more important to Argentines than in the US where we can rely on better functioning institutions.  The great irony of this lesson was that the person who taught the class turned out to be the SISTER of our relocation guide who recommended the class.   The class was excellent so we didn’t feel the least bit taken advantage of, but it was an interesting discovery.

We also had our first houseguests on Sunday, who came for a bit of swimming and to watch the Boca futbol game.  The kids amused themselves by creating videos

and all had a good time.  We continue to be amazed by how friendly and welcoming the Argentines have been and we feel very fortunate to have made such nice friends.

On Tuesday there was a general strike.  We kept the kids home from school because we couldn’t judge the impact, but it turned out to not have hit our area, though the downtown was very heavily impacted.

Tuesday night we were invited to the Ambassador’s residence to see the Latin American premier of the new season of Game of Thrones.  We were slightly apprehensive about the prospect of a formal gathering at a diplomat’s home to watch the grisly violence and raunchy sex scenes that the show is known for, but they had the model of the iron throne

that seemed to put everyone in good spirits.  We met some fellow ex-pats along with some locals and even had a nice chat with the ambassador’s mom.  After the show, we were sipping wine and speaking Spanglish with this mixed crowd and it occurred to me, that we were in fact, starting to settle in.

One thought on “Nos acostumbramos (we get acclimated)”